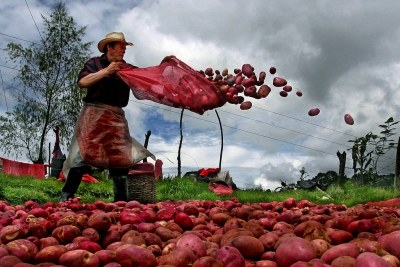 Public policy change agendas by Family Farming National Committees in Madagascar, Indonesia, Paraguay and the Dominican Republic will be financially and technically supported. New Committees will be created in Fiji and Macedonia.

Family Farming National Committees (FFNC) are multi-stakeholder platforms working at national level to improve public policies in favour of family farming and promote its implementation. They were key to achieve results during the IYFF-2014 and they keep on working in the framework of the IYFF+10.

The project called “The legacy of IYFF 2014 and the way forward”, funded by the International Fund for Agricultural Development (IFAD) and the FAO is being implemented by the WRF in conjunction with FIDA-MERCOSUR CLAEH, INADES-Formation International and AMARC. It aims to improve specific public policies at national level by promoting the agenda of several Family Farming National Committees.

The project creates a challenge fund open to proposals from the Committees. 6 proposals will be selected in each call by a selection committee consisting of 3 representatives of the World Coordination Committee of the IYFF+10 (AFA, COPROFAM and PAFO), 1 representative from the WRF, as well as IFAD and FAO as observers.

The first 6 Committees selected targeted relevant public policies to be improved or implemented in their countries:

Madagascar: The main objective of Madagascar’s National Committee on Family Farming is to turn Family Farming into a priority on the country’s political agenda. To achieve that, it will work on improving the national strategy for agricultural and rural training as well as the land policy, so that they take account of the requirements identified by the farmers themselves.

The Project also involves carrying out a study of the definition of family farming in Madagascar to help improve knowledge of the situation in the sector.

Indonesia: The Indonesian National Committee’s intends to monitor the implementation of various public policies: the Government Regulation on access to credit, the National Law on foodstuffs and the National Law on protecting and empowering farmers, among others.

The Indonesian NCFF also plans to develop National Guidelines for fostering Family Farming with the objective of establishing a common framework for incorporating Family Farming into the country’s legislation and policies.

The proposal also aims to empower women by enabling them to take an active part in the discussion and implementation of the Law on Public Policies for Rural Women, currently in the process of being approved.

The second objective is to strengthen the peasant movement’s capacity to plan and supervise the programme.

In the section relating to the creation of new National Committees on Family Farming, the proposals selected are those from Fiji and Macedonia.

Fiji: the set-up of a NCFF in Fiji is being promoted by PIFON, the regional network of farming bodies in the Pacific. This project is based on the need to recognise Family Farming in the classification of agricultural activity, something that has not yet been done even though 80% of the country’s agriculture is carried out by family farmers.

The first step will therefore be to have the concept of Family Farming recognised by the main stakeholders involved, to contribute to having its importance acknowledged and to promote the creation of a national forum for dialogue involving the participation of farming organisations alongside other agents, such as government entities and international bodies.

Since the dissolution of Yugoslavia in 1991, armed conflict, migration and lack of public investment in the sector have led to the decline of Family Farming. The newly established NCFF therefore aims to exert political influence in order to create a more favourable legal and social environment for the development of family farms in the country.