Home What is the Decade?

What is the Decade?

After an intense campaign led by civil society, on 20 December 2017, the United Nations General Assembly unanimously and supported by 104 countries, adopted the Resolution (A/RES/72/239) declaring 2019-2028 as the United Nations Decade of Family Farming (UNDFF).

The UNDFF is a historic opportunity to stimulate the development of public policies and investments in favour of family farming from a holistic perspective, unlocking the transformative potential of family farmers and making a huge contribution to the achievement of Sustainable Development Goals (SDG). It places family farmers at the centre of food systems, ensuring food security, improving livelihoods, better managing natural resources, protecting the environment, maintaining culture and achieving inclusive and sustainable development.

The UN General Assembly designated FAO and IFAD to lead the implementation of the Decade, along with a range of other actors, including National Committees for Family Farming, other platforms for policy dialogue and family farming organizations.

On 29 May 2019, during the official Launch of the Decade of Family Farming, organized by FAO and IFAD in Rome, with the presence of qualified representatives of governments, farmer organizations, National Committees for Family Farming ( NCFF ), etc., and other platforms for policy dialogue, the Global Action Plan for the Decade was officially launched. This is therefore an official document adopted by international agencies and governments within the framework of the Decade.

It is the result of a broad consultation process launched by FAO and IFAD with the different actors, especially family farming organizations, and includes the concrete proposals resulting from the VI Global Conference on Family Farming organized by the WRF in March 2019.

The resulting Global Action Plan is a highly relevant framework that offers guidelines and orientation, concrete and coordinated measures to guide the development of the Decade in its next 10 years.

It is structured in 7 pillars that are ultimately the areas of action for developing policies, programmes and regulations in support of family farming.

The implementation of the UNDFF is the responsibility of all the actors involved, but we would like to emphasize the fundamental role played by the NCFF and other platforms for political dialogue, together with family farming organizations, in ensuring the success of the Decade.

The changes in these 10 years must take place at the global and regional level, but above all at the national level, which is where the greatest impact will be made to improve the quality of life of family farmers.

That is why the Global Action Plan includes ambitious goals, which are essential to bring the UNDFF to the field and generate positive impact. 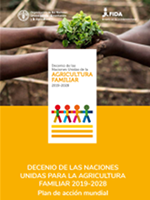 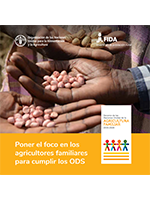 Putting family farmers at the centre to achieve the SDGs