Home International DECADE OF FAMILY FARMING NOW CLOSE TO BEING DECLARED BY THE UNITED... 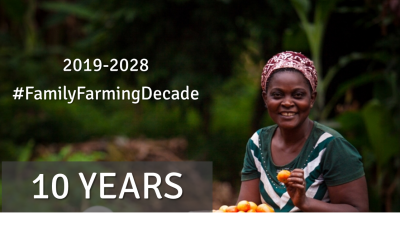 The Second Committee has approved the Proposal for a Resolution which the United Nations General Assembly will adopt in mid-December.

Tuesday, 28 November – The Decade of Family Farming (2019-2028) is now close to being adopted by the United Nations General Assembly. Having discussed the text, the Second Committee has now approved the Proposal for a Resolution on the Decade of Family Farming 2019-2028. The Resolution was proposed by a group of 14 countries headed by Costa Rica at the beginning of October and is backed by a total of 104 countries. It is expected to be approved by the General Assembly in mid-December.

The approval of the Decade will be a milestone event of major significance for Family Farming throughout the world. It is the result of a civil society campaign conducted within the framework of the IYFF+10 initiative which builds on the successes of International Year of Family Farming 2014 and received the backing of Family Farming organizations from all five continents, as well as investigation centres, Regional Integration Spaces, Governments and from international entities.

It should be recognized the great work made by the regional Family Farming organisations AFA, COPROFAM, PAFO, PDRR, PIFON, PROPAC, ROPPA and UMAGRI and the international entities FAO, IFAD, ILC and IICA during the campaign for the declaration of the Decade. Also we recognize the support of all the countries in the Community of Latin American and Caribbean States (CELAC), the Specialised Meeting on Family Farming (REAF) and the Community of Portuguese Speaking Countries (CPLP) and more than 300 other civil society organisations, governments, research centres, international organisations and cooperatives, among others, that sign the support letter for the Decade.

The Proposal for a Resolution approved by the Second Committee and expected to be adopted by the General Assembly in mid-December acknowledges the important part that National Committees on Family Farming (NCFF) played during the IYFF-2014 and that will continue playing during the Decade.

The document  itself states that “815 million people throughout the world still suffer from hunger” and stresses “the important role of family farms in the production of more than 80 per cent of the world’s food in value terms”.

The text also recalls that nearly 80% of the extreme poor live in rural areas and work in agriculture and that devoting resources to developing rural areas and sustainable agriculture, supporting smallholder farmers, especially women farmers, is key to ending poverty in all its forms and dimensions.

The goal of the Decade will be to improve living and working conditions for family farmers (both women and men) across all five continents.

The Decade of Family Farming 2019-2028 will provide a framework for fulfilling the Sustainable Development Goals (SDGs) on eradicating hunger and poverty by improving public policies in support of Family Farming.