Home International THE DECADE OF FAMILY FARMING 2019-2028 OFFICIALY ADOPTED BY THE UNITED NATIONS... 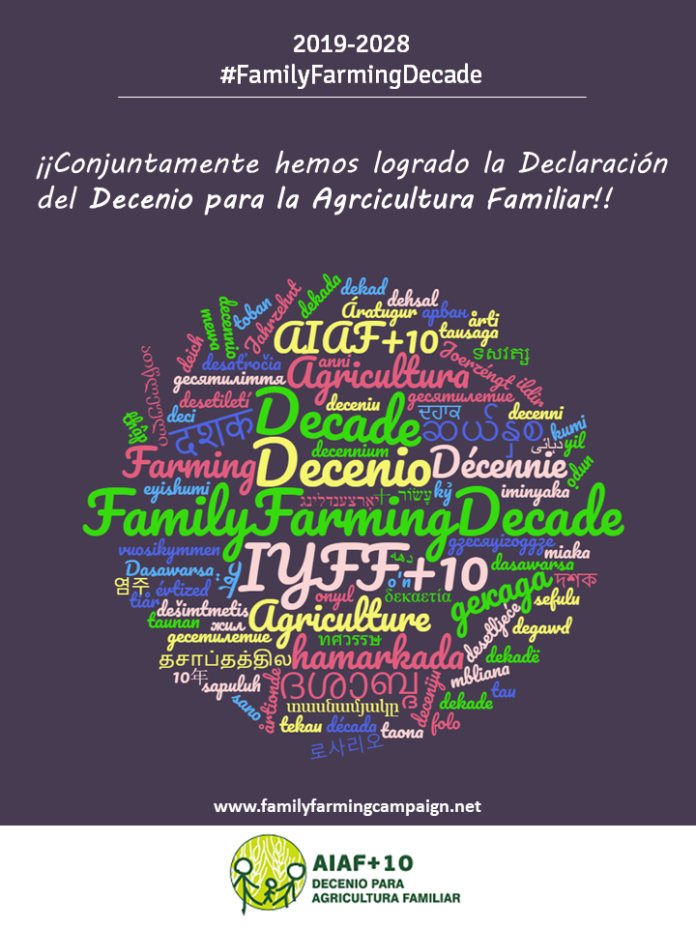 The IYFF +10 World Coordination Committee, leader of the campaign for the declaration of the International Year of Family Farming 2014 and the Decade now, is developing an Action Plan to be presented to FAO, IFAD and Governments.

20th December 2017, New York.- The United Nations General Assembly, in its 72nd Session, has officially adopted on December 20th, 2017, the Decade of Family Farming 2019-2028. This Decade aims to serve as a framework to promote better public policies on Family Farming, and offers a unique opportunity to contribute end hunger and poverty as well as to achieve the Sustainable Development Goals (SDGs). The Decade Resolution document, proposed in early October by a group of 14 countries lead by Costa Rica, was co-sponsored by 104 states and unanimously approved at the General Assembly plenary session. This is an evidence of the great interest the topic has raised in the countries.

The IYFF +10 World Coordination Committee (WCC) greets the resolution, which consolidates its demands and strengthens its commitment to keep working and supporting the development of new and better policies towards Family Farming in the countries and regions.  With this objective, the WCC has worked intensely to achieve the declaration of the Decade of Family Farming 2019-2028.

The adoption of the IYFF+10/Decade of Family Farming 2019-2028, is the result of a long process started in 2008 with the campaign for the Declaration of the International Year of Family Farming (IYFF-2014), coordinated by the World Rural Forum and driven mainly by Family Farming organizations, which obtained significant milestones towards Family Farming especially in terms of public policy.  The Resolution itself recognizes that the IYFF-2014 “raised the profile of the role of family farming, pastoralism and smallholder farming in contributing to the achievement of food security and improved nutrition”.

The declaration of the Decade has been made possible with the support and great work of international organizations, especially FAO, IFAD, ILC and IICA, and we would like to express today our sincere acknowledgment for their position. Furthermore, we acknowledge the support from all the countries in the Community of Latin American and Caribbean States (CELAC), Specialized Meeting on Family Farming of MERCOSUR (REAF) and the Community of Portuguese Language Countries (CPLP), as well as the over 300 civil society organizations, governments, research centers, international organizations and cooperatives, among others. The great leadership role of the Government of Costa Rica should be reiterated.

A JOINT ACTION PLAN TOWARDS FAMILY FARMING FOR THE DECADE

This IYFF+10/Decade of Family Farming 2019-2028 offers the best opportunity to work together to foster new and better public policies towards Family Farming.

The WCC started developing an ambitious Action Plan in order to make this Decade an efficient tool to improve the situation of family farmers.  This Action Plan will be presented to FAO, IFAD and governments.

In the same way, the WCC will seek for the rapid establishment of a governance mechanism for the Decade to offer a relevant place to civil society.

THE DECADE RECOGNIZES THE ROLE OF NCFF AND THE IMPORTANCE OF AQUACULTURE, PASTORALISM AND FORESTS IN FAMILY FARMING

The Resolution document of the Decade recognizes the important role that the National Committees on Family Farming-NCFF played in the IYFF-2014, and that it also extends to the Decade. Therefore, the IYFF+10/Decade of Family Farming 2019-2028 will seek to strengthen and promote the work of the NCFF present in the five continents. It is expected that the Decade will also focus on the development of Family Farming Support Guidelines.

The WCC especially wishes to highlight some elements included in the resolution document that are of special relevance, such as: the promotion of the exchange of expertise and experiences “farmer to farmer”; the integrating concept of family farming, which includes forests, aquaculture, pastoralism and family fishing, as well as the fundamental role that women and young people play in family farming.