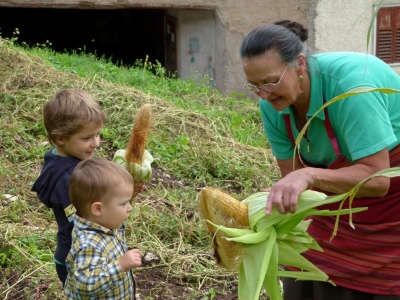 Interview with Auxtin Ortiz, Director of the World Rural Forum (WRF) by FIDA-MERCOSUR

The IYFF+10’s strategy remains focused on its main aim: improving family farming public policies. “Specifically, we are going to give priority to the role of young farmers in the generational renewal of agriculture and gender equality in family farming, where there is still much to be done”, said Auxtin Ortiz, director of the World Rural Forum (WRF) .

—How could you explain the implications of IYFF+10?
The IYFF+10 is just one more stage in a campaign promoting family farming that began in 2008. There is an International Steering Committee formed by the main family farming organizations committed with this campaign.

—Some sectors where disappointed by the IYFF 2014 because unrealistic expectations were raised… What can a campaign like this achieve?
Any public policy process, without exception, in any country and in any moment of history, is essentially slow. We must bear in mind that public policies have not been, are not and will be not a quick process and that they cannot be created overnight.  That is just unreal.

The third (and probably most important achievement) is that 13 countries made specific changes in their public policies to support family farming and that 29 additional public policy processes were started. It will take some time to see the tangible results of these processes. For example, in Gambia, the land access law and the seed law were improved to support family farming.  In Slovakia and Burkina Faso the budget for family farming was increased. In the Philippines, a great success was achieved by the coconut producers: the irregular expenditure of their assigned funds was stop and part of the money was recovered by them.  These are just some examples of the 13 changes in public policies all around the world.

—The upcoming IYFF+10 will last from 2015 to 2025, what are the expectations and what will be the first steps of this project ?
The IYFF+10’s strategy remains focused on its main aim: improving family farming public policies. Specifically, we are going to give priority to the following issues: the role of young farmers in the the generational renewal in agriculture and gender equality in family farming, where there is still much to be done.

We have also more specific proposals to progress in this direction. One of the main aims of the IYFF+10 is to connect agricultural research centres with family farming organizations. We think that there is an important disconnect between them and this problem must be addressed.

We are going also to promote the national committees, that are political dialogue structures promoting family farming. Our aim is to promote dialogue between those who take decisions, governments, parliaments, senates, those who design and implement public policies and family farming organizations. A lot of solid experience is provided by Mercosur in this field. We want to promote these political dialogue experiences during the next 10 years all around the world, specially, through the national family farming committees that already exist in 40 countries.

Our third task is to promote the creation of specific family farming guidelines. We want the different stakeholders, organizations, governments, international agencies and research centres to put forward a common proposal reflecting the necessity of family farming promotion and the steps to be taken in this direction. The guidelines for family farming are created at a regional, national and, in the future, at an international level.

I would like to remark some ideas, very important in my opinion, for the IYFF+10. First of all, the IYFF+10, as happened with the IYFF 2014, will be developed collaborating with the different stakeholders of society (governments, public bodies and, of course, with the civil society, that is, probably, the most active sector in this initiative) and coordinated as much as possible with them. We are ready to collaborate with those who want to promote family farming sincerely.

In this spirit, we have always worked alongside the REAF, the governments of Mercosur and the governments of Latin America and the Caribbean. Strong links have been created with agencies like the FIDA Mercosur (an important partner when putting this process into action), with Coprofam (we work closely with them and they are members of the International Steering Committee) and with other civil society organizations.

Another important idea is to ensure the continuity of these projects after the IYFF 2014, indeed, this is the key idea of the IYFF+10. We consider that this process began already many years ago and that should continue. Stopping all our efforts once the international year comes to and end wouldn’t be reasonable. Therefore, the IYFF+10 is also a  call for everyone to ensure that this process continues.

I also would like to remark that the IYFF+10 is in progress. There are 40 national committees working at the present moment, the International Steering Committee keeps on working, the organizations continue promoting the IYFF+10, there are projects connected with the IYFF+10.

The IYFF+10 actively promotes the declaration by the General Assembly of the United Nations of the Decade of Family Farming.. The commitment of everyone is needed (specially the governmental commitment)  to make this possible.

Another key idea of the IYFF+10, also in the context of the REAF, is that the civil society and specially the family farming organizations must be always present in creation of public policies. They must be co-producers or co-designers of the public policy.