Home Africa 19 ncff in Africa committed to the development of national action plans... 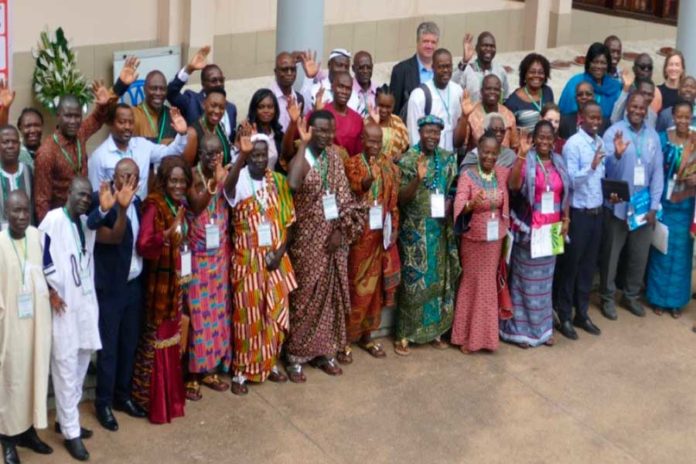 On October 28 and 29, 2019, representatives of the 19 National Committees of Family Farming, NCFF, of Africa exchanged and discussed how to strengthen their capacities and strategies to contribute to the implementation of the United Nations Decade of Family Farming 2019-2028 (UNDFF) in the continent. During this 2nd Regional Meeting of African NCFF held in Abidjan (Ivory Coast), the NCFF exchanged on the opportunities offered by the UNDFF to improve the lives of family farmers and the challenges to develop National Action Plans for the Decade.

The first day, the meeting consisted of work in groups, with the objective of strengthening the mechanisms of operation of the NCFF. It was an opportunity for exchange, exploring the criteria that allow NCFF to improve internal governance and the scope of their activities within the framework of the UNDFF. The NCFF stressed the importance of strengthening communication to act together and the participation of family farmers in improving public policies that affect them.

One of the ways to strengthen the participation of farmers is the creation of sub-national NCFF, as it is the case of the PANAFCI in Ivory Coast that created 15 Regional Committees of Family Farming that group together more than 700 grassroots organizations. The technical coordination of this network is carried out by Inades Formation.

During the exchange, the NCFF also discussed the challenges and solutions to ensure their sustainability (in economic, human and material terms) and autonomy. The UNDFF represents an opportunity for the NCFF to influence public policies in favor of family farmers. They are, in fact, recognized in the Resolution of the UNDFF declaration itself (A / RES / 72/239) for their role during the Decade. There is, however, the fear that the resources allocated will not be enough to carry out their work.

The 2nd day of the meeting was dedicated more specifically to discuss the promotion and implementation of the UNDFF in Africa. The NCFF had the opportunity to exchange on the mobilization of actors (government, grassroots organizations and civil society, private sector, academia and international organizations) for the development of the National Action Plans of the UNDFF. It should be noted that in Africa a National Action Plan has been developed in the Gambia, and another one is being drafted in Sierra Leone. A launching event of the Decade in Madagascar is planned soon and in 16 other countries the dialogue between actors has begun to move towards the development of National Action Plans (Burkina Faso, Burundi, Cameroon, Ivory Coast, Ghana, Guinea Bissau, Kenya, Mali, Niger, Nigeria, DR Congo, Senegal, Tanzania, Chad, Togo and Uganda).

In addition, the NCFF were able to talk with representatives of FAO and IFAD (national and regional offices) about how to work together for the implementation of the UNDFF in Africa.

This 2nd Regional Meeting of African NCFF gives continuity to the 1st Meeting held in Kampala in 2016, an exchange in which the NCFF strengthened to address the campaign for the declaration of the Decade of Family Farming (then IYFF+10).

Once the Decade has been declared, African NCFF have reconvened in Abidjan to strengthen their capacities for the implementation of the UNDFF. A 3rd Meeting, to be held in Madagascar in 2021, will allow the evaluation of the achievements so far and the definition of the steps forward  to make the UNDFF  a real opportunity for Family Farmers to improve their living conditions.

At the meeting in Abidjan, the NCFF reaffirmed their commitment and considered their collaboration with FAO and IFAD as a priority to contribute to the implementation of the UNDFF agenda in the african countries. The dialogue for the construction of National Action Plans will require the broad mobilization of actors (governments, family farmers’ organizations, academia, consumers, private sector …) and resources.