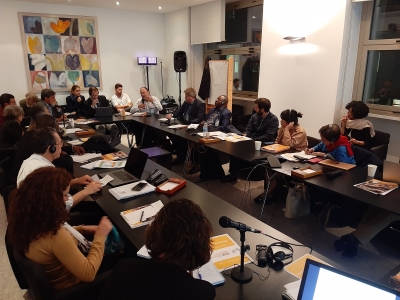 The World CSO Coordinating Committee for the UNDFF brings together a large number of family farmers’ organizations and CSOs involved in the defense and promotion of family farming.

In the framework of the annual meeting of the World Committee for Food Security (CFS), on October 15, 2019, the World CSO Coordinating Committee for the UNDFF (WCC) met to discuss current priorities to properly design actions of the United Nations Decade for Family Farming (UNDFF). The WCC is composed of civil society organizations from all continents, which were strongly involved in the Campaign for the Declaration of the UNDFF and are now working on its implementation at national, regional and global levels.

The WCC broadly discussed, among other issues, about i) the importance of bringing the UNDFF to national and sub-national levels, ii) ensuring the development of national and regional action plans for the UNDFF that contain concrete actions in favor of family farming in the different countries, iii) prioritizing actions to promote youth and women in family farming, iv) ensuring the appropriate monitoring of the UNDFF at all levels (national, regional and global), v) promoting the involvement and commitment of the different actors (governments, agrarian organizations, NCFF, international organizations) in the processes related to the Decade.

The WCC also shared information on the ongoing mobilization to raise awarness on the UNDFF (especially through national and regional launches) and in the processes for developing national and regional UNDFF action plans. More than thirty countries are in the process of mobilization and dialogue for the building of these plans. Recall the commitment assumed in the UNDFF Global Action Plan, which sets the goal of 100 countries with national UNDFF action plans for the year 2024. In this regard, the mobilization already carried out by many National Committees for Family Farming –NCFF, farmers’ organizations, FAO and IFAD national offices and other stakeholders that try to collaborate with governments in the elaboration of such plans, is highly valued.

Every year, the week of October 16 (World Food Day), the World Committee for Food Security (CFS) holds its annual meeting, which brings together representatives from more than 190 countries, intergovernmental organizations (FAO, IFAD, WFP), CSOs, foundations, private sector, etc., to discuss and make proposals on the governance of World Food Security. On this occasion, the CFS has been marked by the Kick off of the United Nations Decade for Family Farming 2019-2028 (UNDFF).

Martin Uriarte, President of the World Rural Forum, together with the Government of Costa Rica, the Government of Indonesia and FAO, participated in a round table on the United Nations Decade for Family Farming, during the plenary session of the Committee on Food Security. His participation in this event was an important speaker to defend family farming and its cooperatives.

Members of the WRF Board attended this important event, taking advantage of the holding of their biannual meeting.

Among other issues, during its meeting in Rome, the Board analyzed the new Strategic Plan 2020-2025, approved a new program for the strengthening of its associated entities, analyzed the execution of its annual budget and organized an exchange session with FAO, IFAD and ILC. There was also time to deepen the new campaign that the WRF will shortly launch in support of agricultural cooperativism and that has been baptized as Agri-COOPDS.

The Board of the WRF is composed of 15 representatives, including a very important representation of agricultural organizations, given that AFA, COPROFAM, PDRR, PIFON and PROPAC together represent more than 31 million family farmers across 4 continents. They are joined by other agricultural organizations such as UPA-Spain, UAGA and ENBA; a benchmark organization in agricultural research such as CIRAD; entities promoting SDGs such as Unesco-Etxea; entities that carry out an excellent job in Family Farming knowledge management such as SOS-FAIM, and a savings and credit cooperative from the Mondragón Group such as Laboral Kutxa. HAZI and  FCI complete this broad spectrum. The Federation of Agri-Cooperatives of the Basque Country (FCAE) was elected to the Presidency, with COPROFAM taking the Vice-Presidency.