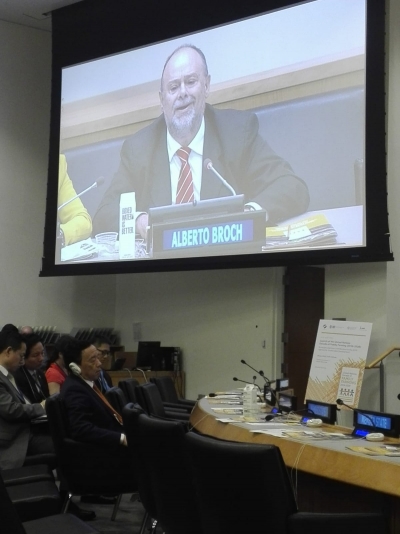 After the official launch of the UNDFF from May 27 to May 29 at the FAO headquarters in Rome, the New York launch during the 2019 HLPF (High-Level Political Forum) brought the opportunity to share the efforts made to smooth the path to the implementation of the UNDFF with member states and delegations.

This past July 16, the launch of the Decade of Family Farming (UNDFF) was celebrated at the United Nations headquarters in New York. Alberto Broch, Vice President of WRF and Secretary-General of COPROFAM, participated in the event alongside José Graziano Da Silva, DG of the FAO; Gilbert Houngbo, President of IFAD; and Epsy Campbell, Vice President of Costa Rica, among others. It is worth noting the presence in the event of the newly elected Director General of FAO, the Chinese Qu Dongyu.

In his speech, Broch stressed the need to “go beyond discussions and take on concrete commitments” by allocating a budget for the development and implementation of National and Regional Plans of Action, supporting and strengthening the National Committees on Family Farming (NCFF), other spaces for dialogue and family farmers organizations or the promotion and creation of new public policy on family farming. He also put special emphasis on the need to rely on an ambitious monitoring and evaluation system for the UNDFF that assures its success.

“Family Farming is extremely important for Humanity. It produces healthy foodstuffs,
breeds cultures, knowledge and traditional flavours and is essential in combatting poverty, hunger and climate change. There are more than 570 million rural farms in the world and of these, 500 million pertain to Family Farming. According to the FAO, Family Farming produces 80% of all foodstuffs and represents 2.5 billion people across all 5 continents” Broch remarked. Thus, family farming is fundamental to achieve the SDGs, as it is already tied to each and every one of the 17 SDGs. “We have identified that Family Farming directly relates to 121 SDG goals, which accounts for 72% of the total 2030 Agenda”.

However, the circumstances have changed, as there has been political reorientation in many countries, regressions in rights and politics, fiscal adjustments and successive budget cuts that have weakened public policies concerning Family Farming. Moreover, Broch highlighted the fact that there has been a global increase in hunger and malnutrition, as well as conflict over land and natural resources. “The challenges we face have increased and this poses a threat to the SDG goals and those of the Decade of Family Farming”.

This year marks the beginning of the 2019-2028 UNDFF, and now is the moment to work together while prioritizing family farmers in the implementation of the Decade.

Alberto Broch closed his speech by saying that “We, as family farmers, must reaffirm our commitment to participate in the entire implementation process of the Decade. We must collaborate and lead by example, using our background knowledge and understanding of traditional methods that will contribute to the reproduction of healthy and sustainable food systems as well as to the creation of dietary and nutritional security and sovereignty and sustainable development. It should also assist in combatting hunger, poverty and climate change”.

We share with you the full speech of Alberto Broch, Vice President of the WRF and SG of COPROFAM.