Home Africa The National Committee for the Promotion of Family Farming in DR Congo... 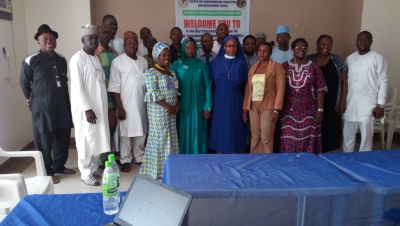 Following a round-table discussion involving key advocates of Family Farming in the country, the National Committee for Family Farming in DR Congo drafted and approved an Electoral Strategy, requesting the support of public authorities in helping to boost Family Farming in the country.  Various farming organisations and NGOs supporting the industry attended the round-table discussion, which took place from 14 to 16 March 2016 in Kinshasa and was entitled “Family Farming: an election issue for DR Congo”.  The event was organised in partnership with the Coalition Against Hunger (CCF) and the Alliance AgriCongo, with the financial backing of the Belgian Fund for Food Security, established by the Belgian Development Cooperation (DGD).

The primary aim of the round-table discussion was to help farming communities to gain awareness of their political and social influence in relation to the country’s political leaders and their commitment to promoting Family Farming, highlighting the economic, social and environmental role family farming plays and its contribution to food security and sovereignty in DR Congo.

The Electoral Strategy drafted at the meeting will serve as a guide for establishing relationships between agricultural organisations and forming links with political actors during the country’s election period.  In this regard, the purpose of the document is to elicit the support of the electoral candidates in order to effectively promote Family Farming.

Likewise, a Pledge of Commitment to boost Family Farming in the country was also drawn up, by means of which collaboration between local communities and potential socio-political leaders in support of the industry will be managed.

By signing the pledge, the political actors would make a commitment “to allocate at least 10% of the provincial and national government budgets to agriculture, with at least half of this amount being used to support small-scale farmers”.

Furthermore, the political actors will pledge to allocate at least 1% of the provincial and national government budgets to agricultural research and outreach, among other commitments.

It should be noted that, even though 70% of the Congolese population makes a living from agriculture and contributes to more than 40% of the country’s GDP, the percentage of the national budget allocated to the industry has never risen above 3%, despite the government having agreed to invest at least 10% in the 2002 Maputo Declaration.

The National Committee for Family Farming of Nigeria has organised a national workshop on Sustainable Development Goals.

The National Committee for Family Farming (CNAF) of Nigeria hosted on 13 May 2016, the “National Workshop on Sustainable Development Goals (SDGs)” with a particular focus on the role of Family Farming in reducing poverty and improving food security in Nigeria.  The event was organised by the Center for Environmental Education and Development (CEED) in partnership with the Nigerian Federal Ministry of Agriculture and Rural Development (FMARD) and other relevant institutions.

During the workshop, Mr. Raymond Nyayiti Enoch, CEO at CEED and member of the National Committee of Family Farming, said that it’s time for Civil Society Organizations (CSO) and other key actors take the lead in promoting SDGs and to hold their governments. Enoch also had an impact on the essential role of rural development and agriculture on the agenda of the ODS, and the commitment to be acquired CSOs in their achievement and in the search for debate in the countries to increase political commitment to this regard.

The National Committee for Family Farming of Nigeria has 20 partner institutions, including several agricultural organisations, local and international NGOs such as Oxfam, Save the Children and Action Aid, and the Nigerian government (the Federal Ministry Of Agriculture and Rural Development).