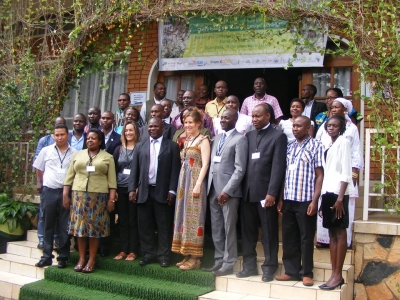 With the main objective of exchanging experiences in public policies in favor of Family Farmig and strengthening the National Committees on Family Farming, NCFF from Central America, Mexico and the Dominican Republic and NCFF from Africa met in Costa Rica and Uganda, respectively, during the last November. These two meetings served to promote the role of the NCFFF in the implementation of the work areas of the IYFF+10 and in the promotion of the declaration of the Decade of Family Farming in their respective countries.

The meeting in San José, Costa Rica, on November 4, brought together NCFF representatives from Costa Rica, El Salvador, Guatemala, Honduras, Mexico, Nicaragua, Panama and the Dominican Republic, who, together with the FRM, reflected on and discussed on the way to strengthen the NCFF as spaces for dialogue and consultation on public policies in favor of Family Farming and defined different strategies to promote the IYFF+10 initiative. In addition to the NCFF, IFAD’s Subregional Office for Central America, the Rural Regional Dialogue Program (PDRR), PRISMA Foundation, FIDA-MERCOSUR CLAEH, La Vía Campesina, the Government of Guatemala and IICA participated in the discussions as guests.

The regional meeting of NCFF from Africa was held in Kampala, Uganda, on 15-16 November, bringing together representatives of Burkina Faso, Burundi, Côte d’Ivoire, Gambia, Ghana, Guinea Bissau, Kenya, Madagascar, Mali, Nigeria, the Democratic Republic of the Congo, Senegal, Sierra Leone, Togo, Zimbabwe and Uganda. Thus, this meeting served to work on improving the representativeness of their respective NCFF and to expand their participation in the development of the IYFF+10 initiative through several mini-workshops.

The Government of Uganda showed its support for the event through the presence of Mr. Zakayo Muyaka, representative of the Ministry of Agriculture, Livestock and Fisheries, who presided over the opening ceremony of the meeting.

Both meetings were made possible thanks to the support of the NCFF from Uganda and Costa Rica, who hosted the meetings.

The National Committees on Family Farming (NCFFs) set up in the context of IYFF 2014 are platforms for concertation and dialogue in relation to policies having an impact on Family Farming. They bring together the various players involved in rural development: rural organisations, NGOs, research centres, public institutions and international bodies. They have obtained significant improvements in the institutional and legislative framework, thus ensuring that public policies take more account of the needs of family farmers. The Committees are continuing their action through IYFF+10 and they are playing a key role in the development of that initiative.