Home Family Farming Campaign THE COMMUNITY OF PORTUGUESE-SPEAKING COUNTRIES HAS APPROVED THE GUIDELINES IN SUPPORT OF... 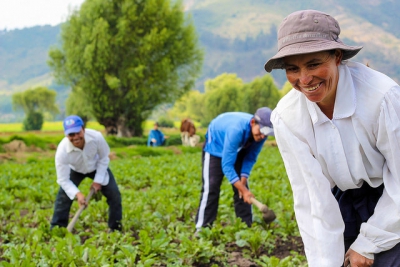 The REAF is also making progress in the preparation of Regional Guidelines for Family Farming now that it has confirmed a policy agreement on defining them.

29 June 2017 – The Community of Portuguese-speaking Countries (CPLP) (comprising 9 States) confirmed its approval of Guidelines in support of Family Farming at the second extraordinary meeting of the Council for Food Security held in Brasilia (Brazil) on 8 June. A decision was also taken at the same meeting to give maximum political priority to immediate implementation. That means that the CPLP Member States now have coordinated priorities for the development of Family Farming designed to combat hunger and poverty.

The process of drafting those Common Guidelines through public consultation has raised the profile of Family Farming and proposes instruments of support adapted to each individual context. This is a political decision of great importance by the CPLP States since it stimulates the introduction and improvement of public policies on Family Farming on such important matters as access to land, water and seed, improving the situation of rural women and providing opportunities for young people in rural areas.

Representatives of Angola, Brazil, Cape Verde, Guinea-Bissau, Mozambique, Portugal, San Tomé and Príncipe and East Timor on the Committee Coordinating the Mechanism for Facilitating the Involvement of Civil Society in CONSAN-CPLP (MSC-CONSAN) took part in the second extraordinary meeting of CONSAN –CPLP and argued in favour of approving Regional Guidelines supporting and promoting Family Farming in CPLP Member States.

That Final Declaration of the second extraordinary meeting of CONSAN –CPLP also records the decision by the Member States to continue to play their part in the international move to have the UN General Assembly declare a Decade on Family Farming by promoting joint action with the WRF and other regions to achieve that objective.

The REAF (Specialized Meeting on Family Farming of MERCOSUR) took a major step towards preparing Regional Guidelines in support of Family Farming when it confirmed the political undertaking by participating States at meetings held in Olmué (Chile) from 19 to 23 June.

Six Mercosur countries (Argentina, Chile, Brazil, Ecuador, Uruguay and Paraguay) have thus signed up to the Olmué Charter setting out their “strong resolve to progress towards the establishment of a set of Guidelines on Specific Public Policies for Family Farming and Indigenous Farming to be used as a guide to meeting the challenges facing each country, thus taking what has been achieved so far even further”.

They also argue in favour of the effectiveness of joint action by governments and social organizations on Family Farming, thus making it a legitimate democratic process.

Those Guidelines will complement and support the national and regional initiatives currently under way with regard to public policies for Family Farming, supporting their development and contributing to making them a permanent feature.