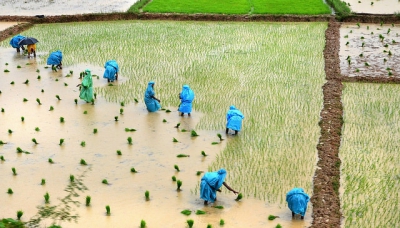 On October 18th, an important meeting of the World Coordination Committee of the IYFF + 10 (WCC), the International Committee that led the civil society campaign for the declaration of the Decade of Family Farming, took place in Rome. The WCC is composed by representatives of the organizations ROPPA, PAFO, INADES INTERNACIONAL, COPROFAM, RELACC, PDRR, AFA, ASIADHRRA, SEWA, UPA, AFDI, NZYF, OXFAM, IFOAM Organics International, ACTION AID, the National Committees of Madagascar, Costa Rica and Nepal, and the WRF.

The WCC manifested an enormous and firm commitment to the development of the Decade for Family Farming 2019-2028, highlighting the historic opportunity to contribute to the fulfillment of the SDGs through the improvement of the situation of family farmers, enhancing their capacities for sustainable food production, fight against hunger and poverty, resilience to climate change, maintenance of the territory, culture, among others.

The member organizations of the WCC committed to present a report on the progress and achievements of the IYFF + 10. This report is part of a process of analysis that is currently being carried out based on a series of indicators that show the improvement of public policies and the institutional framework of family farming, among other aspects evaluated.

It is strategic when defining the mechanisms for the implementation of the Decade for Family Farming to make visible to international organizations, governments, and also to the organizations themselves, the achievements, as well as the difficulties faced, of the organizations of family farming and the National Committees of Family Farming, with the aim of improving related public policies.

The report on the achievements of the IYFF + 10 will be validated by the WCC and presented at the VI Global Conference on Family Farming to be held in Derio, Bilbao, on March 27 and 28, 2019, with the participation of more than 200 government representatives, agrarian organizations, international organizations, National Committees of Family Farming, rural development associations, NGOs, cooperatives and research centers of the five continents.

Preparation of the Action Plan for the Decade of Family Farming

On the other hand, the members of the WCC examined the progress in the preparation of the Decade of Family Farming and very favorably welcomed the role that family farming organizations are going to have in the definition and implementation of it, as has been shown by the International Steering Committee of the Decade (ISC) with the incorporation of five regional family farmers’ organizations.

It has also been widely recognized by the international organizations FAO and IFAD and by governments that for the Decade of Family Agriculture to have a positive and transforming impact on rural realities, the Decade must be effectively implemented at the national, regional and global levels.

In this sense, a process of public consultation has been launched that is aimed at the elaboration of the Decade Action Plan. A fundamental part of this consultation is an online survey that can be carried out through the Family Farming Knowledge Platform of FAO. The survey can be accessed and filled out through this link: SURVEY

From the WRF, we strongly recommend to all the entities that work in favor of family farming that they fill in the questionnaire, share this link between partners and members, and create dialogue with the different agents to preserve the definition of the commitments, actions and plans in the national, regional and global levels that will constitute the Decade Action Plan.

We must take advantage of this key moment to show the specific public policy objectives that we are willing to achieve during the Decade for Family Farming, especially at the national level.